Bhuj is a treasure trove of heritage and culture in India. Bhuj is known for its small, meandering streets, palaces and temples. It also has the oldest museum in the state of Gujarat. It not only has numerous places of interest within the city, but places around it are very famous for their traditional handicrafts and embroidery, especially the villages. 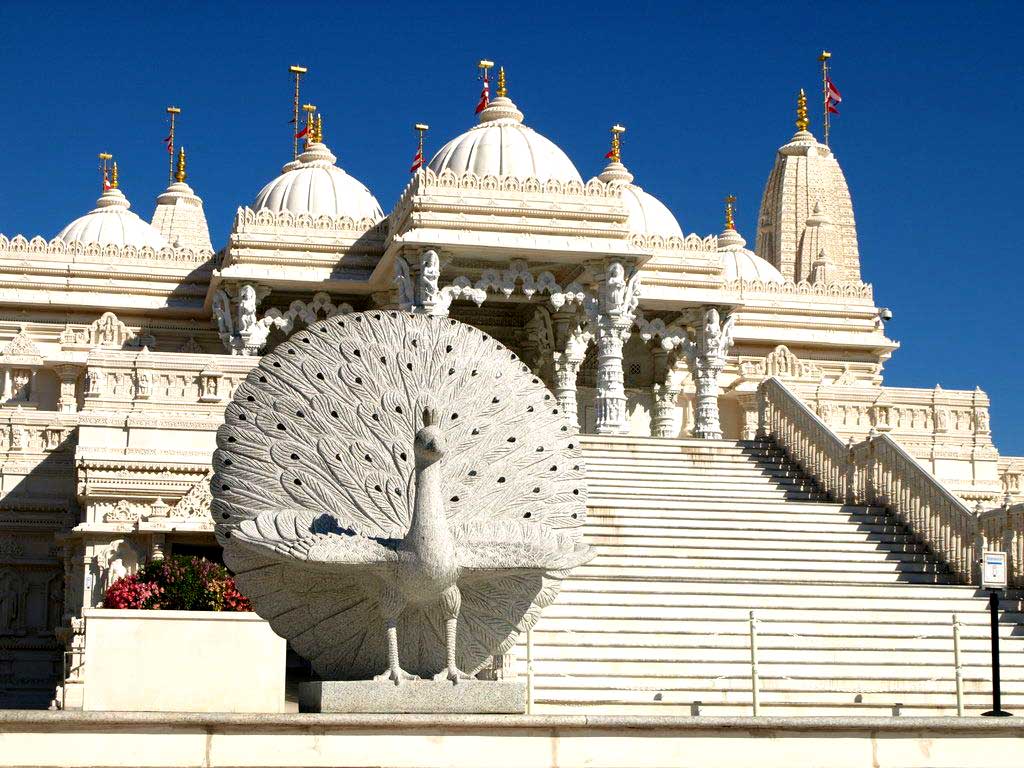 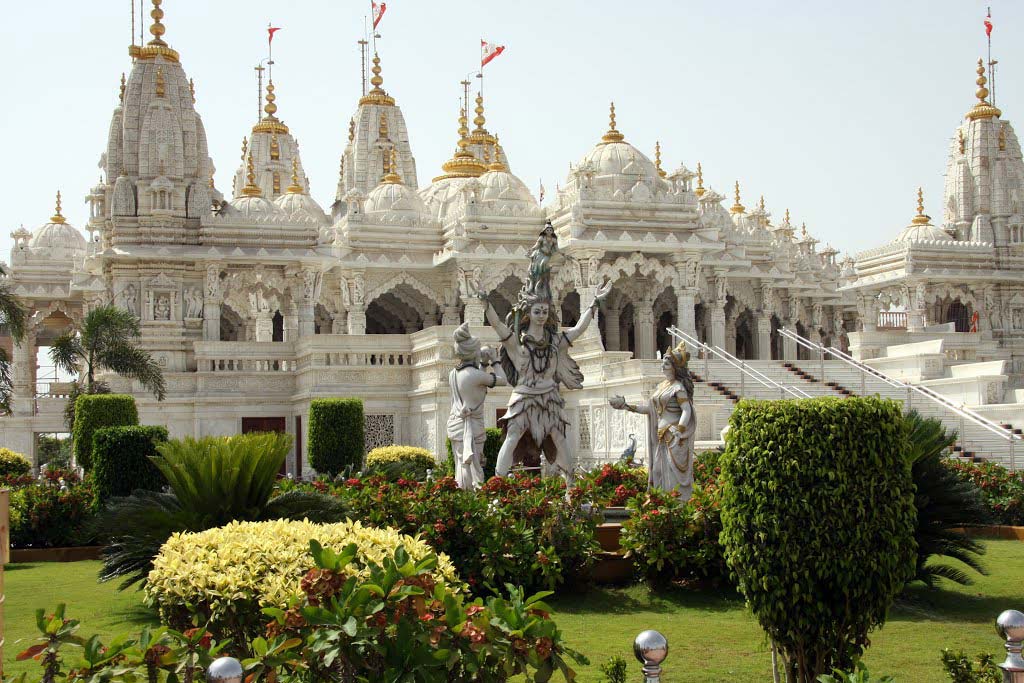 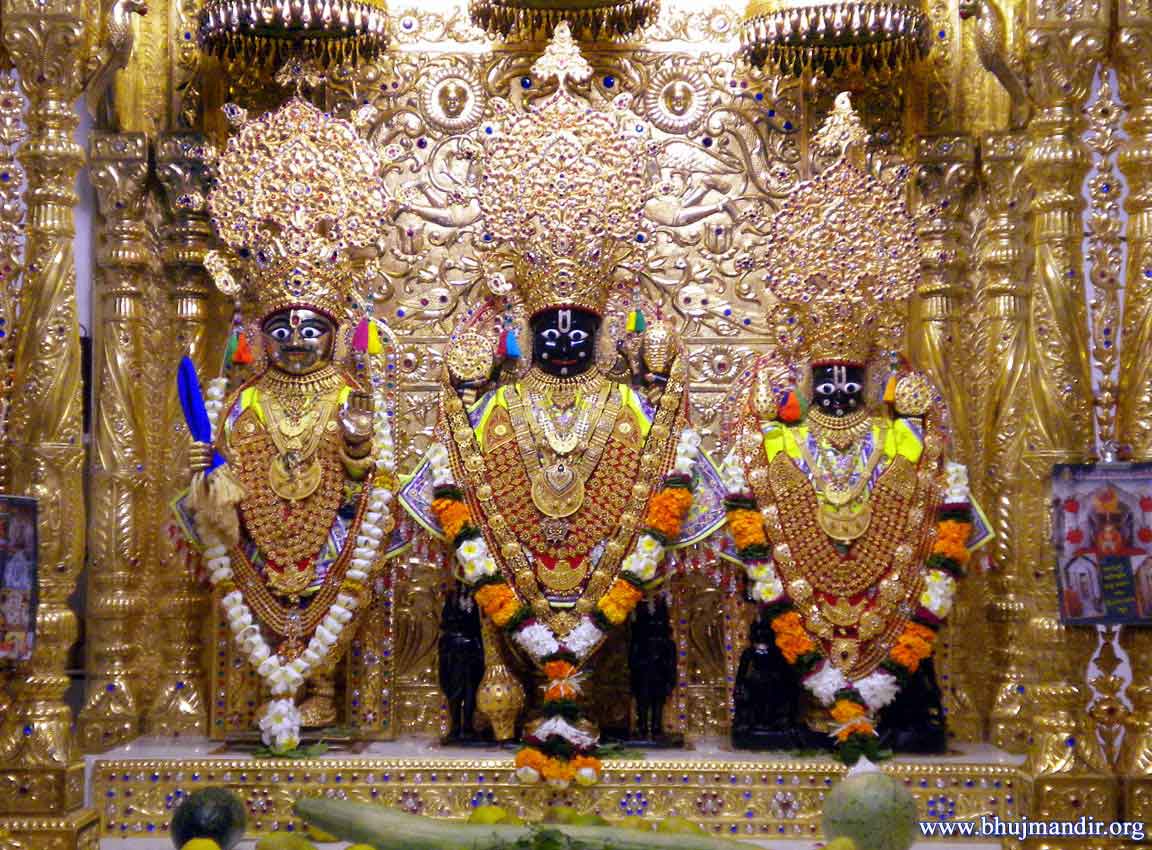 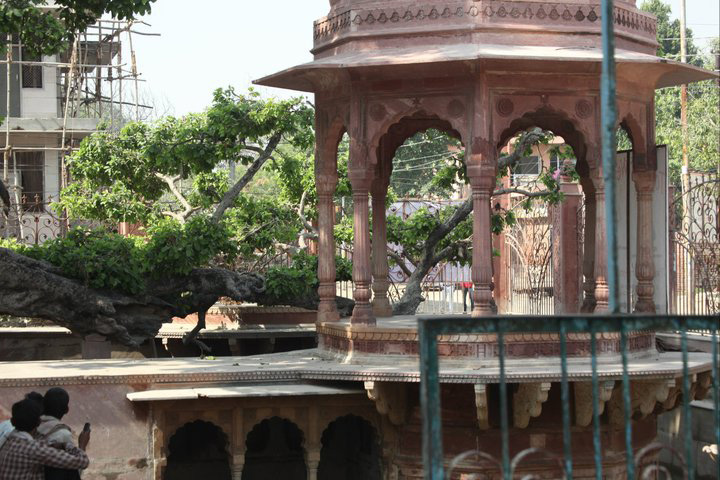 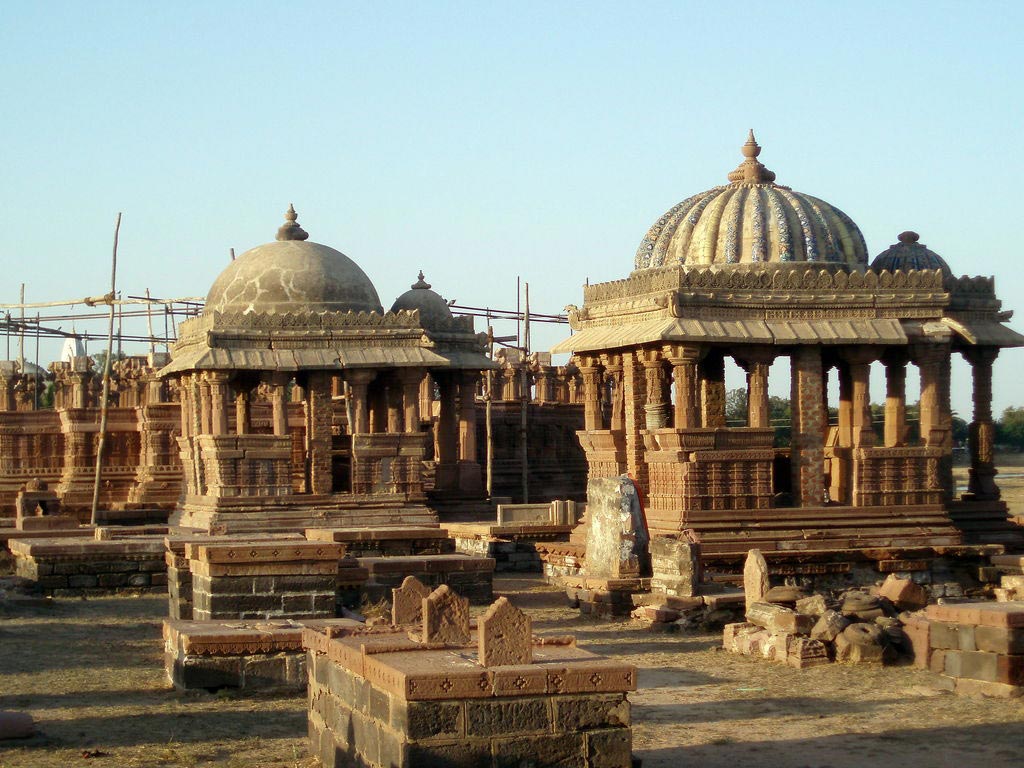 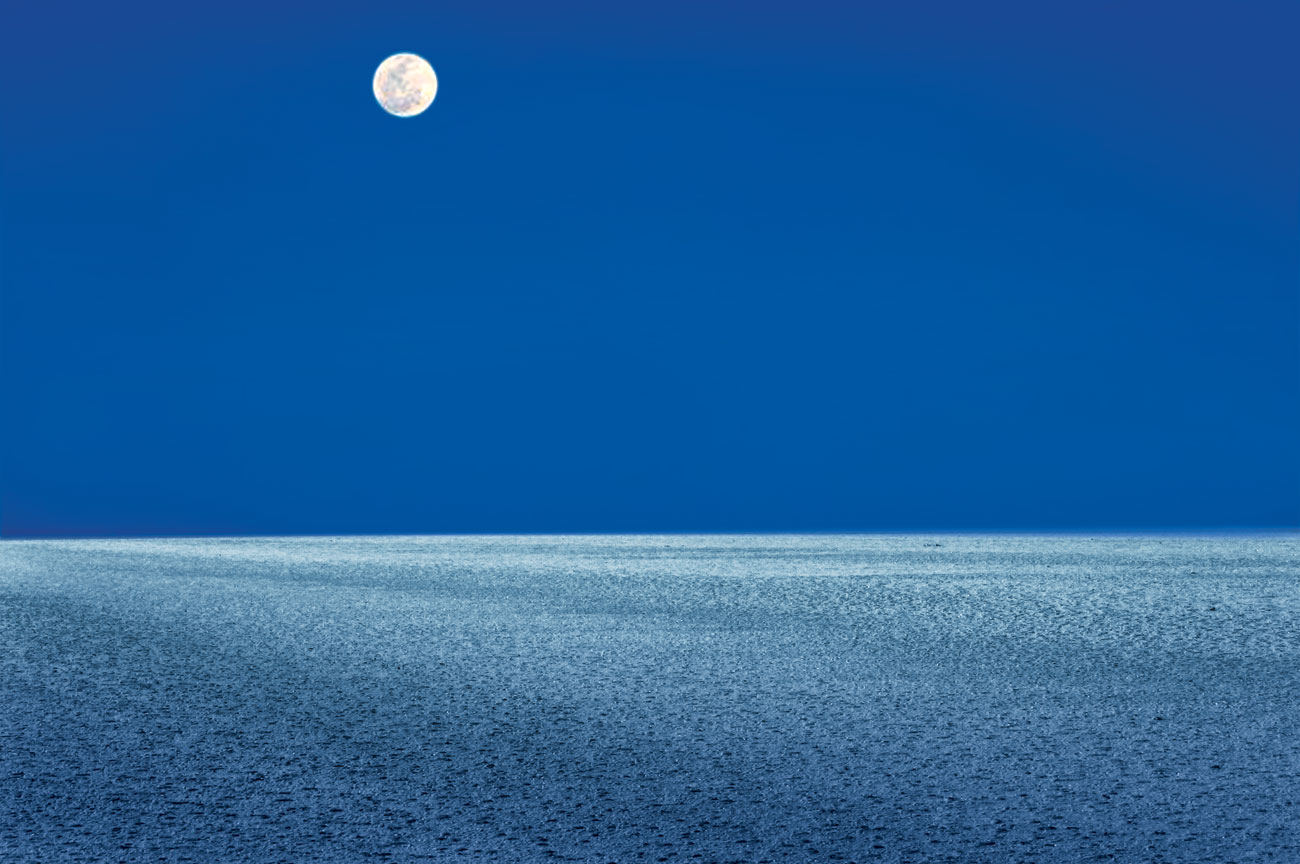 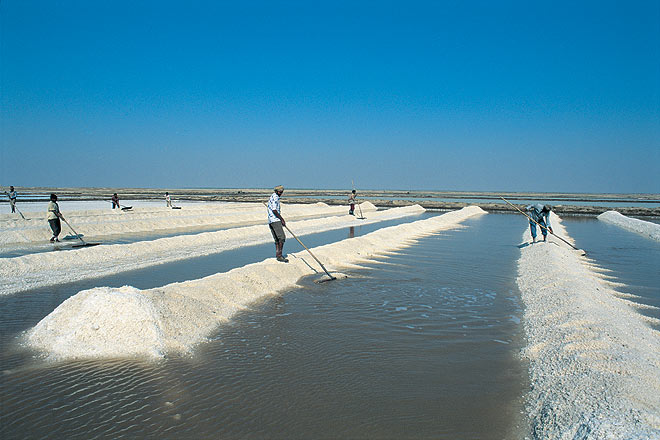 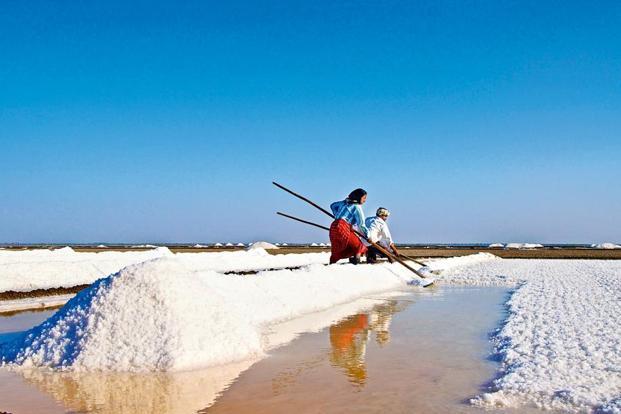 Rann Utsav is an awesome festival of Kutch, Gujarat, India. It is a Carnival of Music, Dance, nature beauty of White Rann and much more then that when visit under the full Moon. Kutch Rann Utsav is the shimmering landscape that gives the enchanting moments of this Fest, which feels like as Heaven On Earth during Festival Time. In fact, it’s a Family holiday destination to explore fun moments and store in cameras for life time.

Kutch region has an impression of being a distinctive land. It is a region that differs in celebrating prosperity on an exceptional parameter. Divided into two sub-regions.

Arrive Bhuj and transfer to your hotel.

The historic city of Bhuj derives its name from the BhujiyoDungar, a hill, overlooking the present day Bhuj town. Bhuj is a typical example of a desert town located between two geographical features - BhujiyoDungar on the east &Hamirsar Lake on the west. Bhuj, the major town of Kutch, is an old city established in 1510. With its surrounding wall, the atmospheric bazaar area, crenelated gateways, old palaces and striking temples the town still retains a medieval character. Every Nov/Febit hosts the annual Rann Utsav festival.

After breakfast visit the Banni Villages. Visit Ajrakhpur and Bhujodi.

Later stop at Bhujodi – a village skilled in traditional Bandhani (tie & dye), block printing and weaving. Here you can view live demonstrations and buy anything from shawls to blankets from the artisans directly. Bhujodi is also a centre for Piltoom weaving, Mewada Embroidery & Wood Carving. Nearby is the Hiralakshmi Crafts Park – a nonprofit under-taking by the Ashapura Group of Companies that works with artisans throughout Kutch to show their skills and retail their crafts.

Amidst the Desert land of infinite dimensions, are suspended, quaint little villages. These are the last villages on the India-Pakistan border. Here you will come across master craft people' exposing their traditional art, turning our master pieces every day. Their ornaments, clothes, utensils, everything they use - will make you feel as if you have stepped into lifestyle museum leaving you spellbound.

Nirona: The village of multiple talents! The village of Nirona is the only place in the world where the tradition of Rogan art is still practiced (a method of producing dyes from natural resources and castor oil and creating intricate and long-lasting designs on silk and cotton). Rogan art is a rare craft that is not well known even in India. Because of its rare qualities, it is practiced by only one family in India and they reside in Nirona village in Gujarat. They would be happy to teach you a trick or two in the intricate Rogan painting.

Nirona also offers the chance to see artisans making copper bells. The Luhars in Nirona have been preserving the craft of making copper bells over seven generations. The art form originally comes from Sindh and some sister villages in Pakistan too make similar bells but with carvings on the surface.

Another family in Nirona is practicing wood lacquering. Raw lacquer in various colours is passed with great skill on the wooden object of focus in beautiful waves. The work they do is mainly focused on household items like jewellery boxes and kitchen utensils and is known to last more than 30-35 years. If the lacquer work starts to lose its sheen, just apply some oil on it.

Visit the Bhirandiyara – is a favorite Tea stop for locals and visitors alike on the road to Khavda. The village boasts of a delicious sweet – fresh Maavo. This milk-based sweet is best when eaten hot. Most of the roadside stalls sell Maavo. The local Meghwal Community has exquisite embroideries and skillfully decorated, colorful Mud Bhungas.

Ludia Village is comprised of several hamlets belonging to the Meghwal&Samma Communities. The latter community, primarily herdsmen, is more conservative when it comes to tourists. Gandhi nu Gam, populated by the Meghwal community, features beautifully Painted Bhungas .The Kanjari (Blouses) of the women and the Bhunga decoration of this village are especially colorful.

Khavda' pottery is an art form of Khavda, North Kutch . While the men do all the throwing in terracotta, the women handle all the surface decoration which in this northern Kutch village of Ludia is primarily in the form of painting.
The potter gets mud from a specific acre (A lake) area near village. It is called 'Rann ka mitti'. This soft clay is shaped into a pot on a potter’s wheel and left to dry in shade, then Kumbhar women use red, black, and white clay-based paints to decorate each piece of pottery with distinct community-specific designs. After a while, it is cleaned and put in the sun to dry and then baked in a furnace, powered by simple and locally available fuels of dry wood and cow dung. The vessels are coated with a thin wash of geru (red color). The pots of Khavda get their red colour from Geru, a type of soil (ocher/ umber), and the black and white dots and stripes are also made with natural material. Finished pieces lie aside, ready for drying. The terracotta pots of Khavda are distinct from the ones we may see elsewhere, because of their painting and form which is a result of repeated cleaning at every stage of the process of their making.
White Rann : the spectacular sight of boundless white desert is the stunning creation of nature, unique to this world.

After breakfast proceed for day excursion to Mandvi.

Visit Kala Raksha Trust, a grassroots social enterprise, is dedicated to preservation of traditional arts. Envision this broadly, as holistic encouraging of the creative capacity of the artist. Comprising artisans, community members, and experts in the fields of art, design and museums, Kala Raksha was founded on artisan initiative in 1993 in the desert region Kutch, in India. Uniquely committed to documenting existing traditions, the Trust maintains a collection of heirloom textiles housed as a local Museum. Artisans participated in establishing this Museum. Thus it embodies a simple but revolutionary concept: involve people in presenting their own cultures. Kala Raksha Centre is located in Sumrasar Sheikh, 25 km north of Bhuj.

Here, the museum, production unit, shop and guest house inhabit structures that adapt traditional architecture to contemporary function. A model for community development, the Centre is locally managed and operates with solar power.

KalarakshaVidhyalaya: Kala Raksha Vidhyalaya is an initiative of Kala Raksha Trust. In its second decade, Kala Raksha sought to address India’s most pressing need: Education. In October 2005, the Trust launched this institution, whose environment, curriculum and methodology are designed for traditional artisans, as a new approach to the rejuvenation of traditional arts. Project Director Judy Frater, was awarded an Ashoka Foundation Fellowship to realize the project. In March 2009 she also received the Sir Misha Black Medal for design education.

Later continue to drive to Mandvi.

Mandvi is located on the banks of the Rukmavati River, barely one km from the Arabian Sea at the Gulf of Kutch. The town has a very pleasant climate throughout the year and it was a summer retreat of the Kutch Maharaos. The centre of attraction at Mandvi is the Vijay Vilas Palace, a royal abode set in the middle of well-laid gardens with water channels and marble fountains. The architect and craftsmen from Jaipur designed and constructed the palace in 1920 AD. The palace has all the elements of Rajput architecture and draws largely on the plan of palaces of Orchha and Datia. The central high dome on the pillars, the Bengal domes on sides, the windows with colored glass, carved stone Jaalis, domed bastions at the corners, extended porch and other exquisitely stone carved elements, make the palace worth visiting. It owns a private beach, maintained in an eco-friendly manner to preserve its pristine beauty. It is an example of the traditional skill of craftsmen of early 20th century.

Visit Ship building yard. On the banks of the Rukmavati River, just south of the bridge, you can visit the still-active shipbuilding yard. Craftsmen still assemble ships out of wood, for local or international guests, and you can feel free to watch them work. It gives us an opportunity to watch handmade ship being built which will make one truly appreciate craftsmanship. The process is long and elaborate and shoddy workmanship means risking sailors' lives.

Later drive back to Bhuj.

After breakfast visit the Kutch Museum, formerly known as the Fergusson Museum. The Kutch museum is the oldest museum in Gujarat. This museum is built in the Italian style and located in picturesque surroundings on the banks of the Hamirsar Lake. The museum has a large collection of Kshatrapa inscriptions, various archaeological objects, arms and specimens of various crafts of the Kutch region.

The Cenotaphs Complex or Chattardi was built of red stones. These tombs were ruined by the successive earthquakes since 1819.

Kera is mainly known due to the 10th century old temple of Lord Shiva.

Aaina Mahal Palace was built by Rao Lakhpatji in 1750 AD. Aaina Mahal is a part of a large palace complex. It is a two Storey building with Darbar Hall, hall of mirrors, and suites for royal family. In the 18th century, the Rao Lakhpatji sent a local craftsman Ramsingh Malam to Europe to perfect his skills in glassmaking, enamelling, tile making and iron founding. After he returned back, he constructed the Aaina Mahal with the hall of mirrors of Venetian glass.

Later in time transfer to Bhuj Airport / Railway Station to board flight / train for your onward journey to your next destination.

Check-In time is 1400 hrs& Check-out time 1200 NOON at all hotels.
• Sasangir National Park willbeclosedfrom 15th June to 15thOctobereveryyear.
• 100% bookings for Sasangir safaris are done online through the website www.girlion.in . We would not be in a position to help if the safari is not booked in advance. Guests’ ID proofs are required for safari bookings.